Frst impression when I arrived at the bus terminal was dark, nothing...

Houses of bricks and car related shops.
But in the central area it seems bit more alive.
Before coming to Puno I was thinking it might have many fishes since it's near the lake but still mostly Chicken 🐔?

I usually don't like tours but it was nice to have homestay in Amantani island, (including short visits to uros island and taquile islan) in Lago titikaka.

What I like was...
Tasting homemade dishes 😋
Nice lake view( so pure blue in some areas, and also kirarkira shiny surface )sunset, sunrise, twinkling thousands stars from 4,000m+high place. 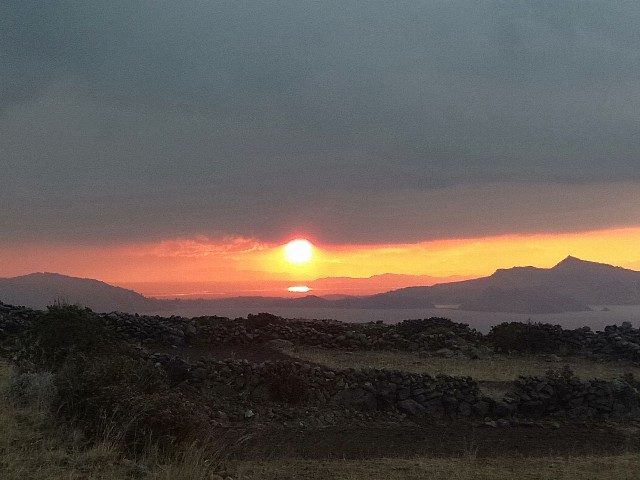 Talking with host family. Tried to speak in Quechua, that they use in Amantani
(The guide showed us basic phrases like so delicious= shinchi samaj, may I help you ?=yanaparisayki, thanks so much =yuspagarasunki )
They speak Spanish well cz they study in Spanish at school. But they dont know English.
I Stayed with other members of Mexico & France, who also speak Spanish but little English!

The 2day tour starts at 7:30am from Puno the coming back on the following day around 4pm, including 1breakfast, 1lunch, and 1 dinner it cost 120soles.

First day we visited Uros islands. They are made of reeds called TOTORA. Smells like Tatami for me. White part  near the root is eaten. It's like shaki shaki texture, not strong taste but bit Sweet. Green part is used for making floors, houses, chairs n crafts.
Uros is the only artificial island while other island are natural.
Why?  We learned that was because at the era of the Spanish colonization, they wanted to preserve their civilization.
It seemed bit too touristic but good experience

Later we went to Amantani.
It took more than 2hours (35km +away) so I did yoga on the rooftop. Felt nice 😊

Amantani ppl speak qechua n Spanish.
I stayed with one girl from Mexico n 3 students from France.
They spoke Spanish n llittle bit English.
English is NOT common language here!🙃
Host family:
Mother 28yrs old.
5yrs old girl
3yrs old girl
Mother's sister
The mother told me that
Father is working in Puno (for fishing? I couldn't understand)n come back on Sundays
Had meals together n danced together at night.
Kids are so cute.
Just looking at us, running around...
Showed worktbook of the school.
They learn in Spanish.
It's like English school in India?
For higher education they need to go outside of the island. Also they would work outside of the island so Spanish seems must for them.
Elderly one was helping Mom for dishwashing.
Now they work on handicraft
In rainy season
before Christmas, they grow potatoes, okas

Oka is like between sweetpotatoes n carrots 🥕, so yummy 😍
I also liked Quinua soup.
They eat meat only for special festival day cz they rarely have meat in the islands.
(They often go to Puno for buying something but maybe self-sufficiency is high? I should have asked about self-sufficiency n expenses of them !)
For me village life seemed similar with the one in ARI( Asian Rural Institute/ASIA gakuin in tochigi)
I could see thousands of Stars from the level of 4,000m + high...
Also sunset was amazing...

At night they dressed us up with their traditional one. Use kind of belt which is like Obi for Japanese Kimono.
Was interesting that their face looked serious.. n sometimes smiling.

I gave origami bird to kids.
Origami is amazing, u can make it everywhere 😉
I could have write their name in nihongo...  !

Following morning we went to taquile.

Wave of the lake was so shiny kirakira...✨✨✨
Wemen weaves n men embroidery.
It's nice that men learn embroidery in school n work on handicraft which seems ladies work?! Though it's still gender oriented...

Adding to the nice experience,
I met a guy from Australia in the ship.
We became good friends 😉
He likes drawing, writing stories, listening to small kids.
"Kids have simple wonderful stories."
"Everyone has important story of their own"
"I'm still a kid that's why I continue painting "
He also worked as ALT in Japan.
Tips for English teaching
For kids: have fun. Do something interactive. Lots of games ;) encourage/motivate them to learn English
For adults: conversation. Especially when they are drinking, they dont mind making mistakes 😋